Myne Whitman and the burden of a name

IF you pick up a copy of the debut novel by Nigerian, US based writer, Myne Whitman, you will be thrilled by the cover which is very classic and will definitely make you believe you are reading a copy of a romance from a western author but when the popular streets of Lagos and Nigerian names start coming up, you will be forced to turn the back page to know who the author really is; the name definitely is not Nigerian you may say but the author is 100 per cent Naija. 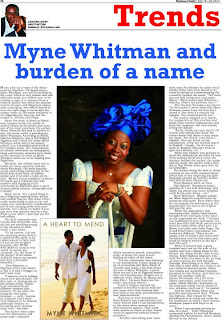 Since the book, A Heart to Mend was released under the stable of Author House in December last year; one of the questions the author, Nkem Okotcha has had to answer is why she wrote under a pseudonym, Myne Whitman.

According to Nkem Okotcha Akinsoto, she is full-fledged Nigerian and coined the name Myne Whitman while still in secondary school; it is a transliterated word of her maiden name. Her explanations on several interviews on newspapers, blogs and literary websites have dealt on her decision to write as Myne Whitman seem not to be sinking into Nigerians.

Recently, the author came out to tackle the issue squarely and she chose Facebook, the most popular social networking community in the world with more than 10 million people and it became a topic on its own. Myne's status comment of about 50 words got a reaction that was massive and engaging if not interesting as Nigerians gave a piece of their minds bluntly, technically and critically.

The first responder was Yoruba Edo Storyteller who did not see anything wrong in her decision to write under a pen name
“To be honest, I do not see anything wrong with it. I expected this issue to be raised sooner or later and it's not an out-of-place question. But MYNE WHITMAN by itself is very 'wierd' or let me say 'unusual'. So, the issue of the history of the name ALWAYS comes up anyway and then it becomes beautiful...”

Vera Ezimora, a Nigerian writer also based in the U.S and a blogger as well came next.
“I assume you're talking about your pseudonym. On that note, it all depends on the person really. People have pseudonyms for different reasons (like privacy). On my part, I'm using my real name because ---- well, I wanna be famous!! And I want Vera Ezimora to be famous (although Verastic is becoming more popular than Vera,” she said.

The author then came into the discussion and made some clearance which somehow placed journalists guilty of being the main actors making an issue of the name.

“Yes the commenter was referring to my pseudonym. Funny thing is a lot of journalists like Mary Ekah of Thisday also made a big deal about the use of Myne Whitman. I guess there are not a lot of Nigerian writers who use Pseudonyms. Singers are a different story, Banky W, Muma Gee, Alex Zitto - I'm sure that's not his name, and many others.”

Tessa O Doghor advised the author to feel free to go on with her pen name and citied authors that even had to use male pseudonyms to beat discrimination.

“Feel free to have pseudonym. Nora Roberts has a pseudonym and many women had to use pseudonyms at the times when women were discriminated against. They used male names as cover so their books could be approved without female prejudice...

Another interesting post came from once Facebooker by name Anuli Okafor Nabo who went ahead to do some lecturing on understanding the creativity behind the name, “Tell them you are still using your real name. Nkem = Myne (mine) and Whitman = Okocha. what's the problem here ?”

But Onyinye Ihezukwu was blunt; “To be honest, I never liked that Myne Whitman name from the first day I heard it. But then it's entirely my opinion. Too westernized for me.”

The author stepped in to thank her supporters at this junction and made some further explanations and from her response, she was already loving the dabate.

“Anuli, thank you very much. Of course only people that knew me earlier know that Myne is also really my name. For others, even when I explain, they are stuck on the pseudonym. A few are worried that it is English. I laugh, cos of course I write in English. Should I write in Igbo too I wonder, lol...”

While Ogo Ogbata was grateful to Anuli for clearing the air since he had been racking his brain to solve the mystery behind the author, the name and the book, the author took a first jab at Ogo whose name gave him up as being Igbo.

The author being the first to throw a punch at one of the commentators about him or her forgetting her Igbo language opened up another debate that strictly went vernacular.

Their dialogue went on thus:
Ogo Ogbata : Nwannem nwayi, gbahalu'm. I am still 'knacking' igbo ohhh, the penny just never dropped until Anuli came along... lol.”
Myne Whitman; Nsogbu adighi, lol. Most Nigerian articles insist on using my real name. Even when they do not explain the association to the pseudonym, I'm sure a lot of Igbos will join the dots.

While the atmosphere was becoming calm, Ephey Nwachineke brought every one back to the issue as she expressed her wish. “I wished you published in your real name. It's more beautiful and while pseudonyms work for some of the other arts, e.g. Music ( actually even Lady Gaga, Jay Z and Prince have real names), but books are different. There are no longer a lot of writers that write with Pseudonyms and the discrimination faced by women writers in the 60's and 70's and ..”

When it seemed that a good number were not on the side of the author and were taking shine in the debate, her fellow writes came to her rescue. Enter Eghosa Imasuen who said,”Do what you want to do, as long as your reasons are well thought through. Everything is in flux; there will come a time when you want to try your hand at another genre, when you wanna say something intensely personal in your fiction, and then you could use another 'nom de plume'.Personally, I'm a bit of an ethnic chauvinist, and I love the name, Nkem Okocha. Sometime, in the long and varied career ahead of you, promise you'll use it,” he posted.

And for that Relief, Myne was grateful and expressed thus, “Thank you Eghosa. One reason for the pseudonym is to retain my name for my profession in which I have written academic papers and hope to do more.”

While I was already getting an idea of a story, Tade Thompson composed a piece he entitled Random Musing On Pseudonyms, which added flavour to the debate.